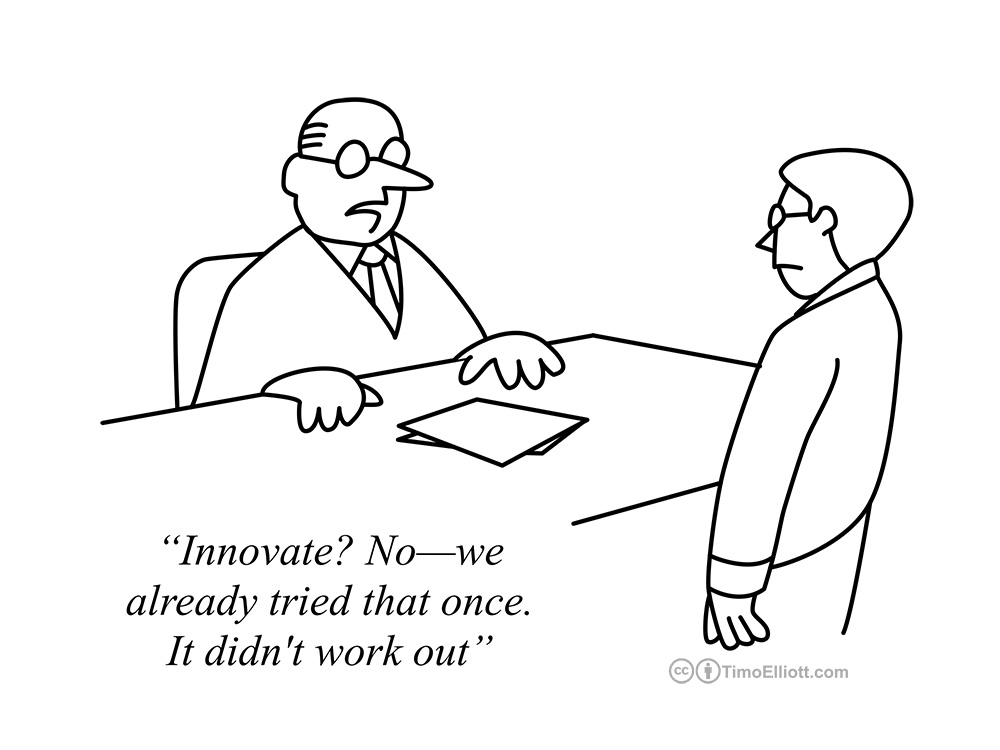 I pondered how [intelligent people within] organizations could make such “curious” decisions.

Around the same time, I found this post from ShopifyPlus that revealed The Dirty Little Secret Traditional Enterprise Software Companies Don’t Want You Knowing. The argument made was that the five major software vendors and their associated ecosystem of system integrators and consultants have locked their customers (probably you) into a multi-$B industry that does little to add real value.

Nobody got fired for buying IBM, right? The result being that 80% of enterprise spend is on legacy systems leaving little budget for innovation.

– Is there a connection between the two posts?
– Are the “curious” decisions a result of the “dirty little secret”?
– Is the lack of innovation really down to budget or is the environment for innovation sub-optimal in large enterprises?
– Is “budget” really the logical justification for an emotional decision already made?
– What is driving that emotional decision?

This thought process led me back to the world of Simon Sinek. Simon is a leadership expert who explores how leaders can inspire cooperation, trust and change.The concept that “people make emotional decisions and then use logic to justify them” is something I first encountered 20 years ago. Simon’s “Start With Why” was the first biological explanation I saw for that concept and was beautifully wrapped in a dialogue of why great leaders inspire, and why great companies succeed.

In turning to Simon for answers to my questions, I extrapolated what I will describe as a hypothesis for the lack of innovation in the [vast?] majority of large enterprises. I believe it to be probably true, you may think it possibly true, or you may dispute it entirely. If you do dispute it entirely, I would love to hear your alternative hypothesis.

Simon wraps his philosophy on innovation, trust and risk in a concept he calls “Leaders Eat Last”. The short form of where he heard that term and what it means can be seen here:

The following video is a little longer and he explains how the environment in any organization creates greatness and that that environment is created when there is a feeling of trust and cooperation. The problem being that it is a feeling, not something you can construct from a set of instructions.

Simon traces that feeling back to the earliest days of caveman society where it was required for people to come together in a tribe to fight external dangers and to be safe. In modern day business, do leaders put their people ahead of the tangibles such as financial performance? If they don’t, then how can employees feel safe? How can they take risks and flirt with failure (or even fail)? How can they innovate?

And so, perhaps, there is a link between the “curious” decisions and the “dirty little secret”. A lack of leadership in many enterprises has created an environment where people are scared to fail, scared to take risks and, consequently, innovation is limited. Asked why they don’t innovate, they blame budget (the rational justification to what is an emotional decision).

It’s an interesting hypothesis and one that applies most to larger corporations. If you have time, Simon Sinek explains why that is the case in this video and finally links everything back to modernity.